The Key West Players continue their smash-hit 66th season with “Mother’s Gift,” an exciting new play by local playwright, Monnie King, opening with a performance at 8:30 p.m. Friday, at the Waterfront Playhouse, in Mallory Square. A courtyard reception will follow the premiere. The play will continue through April 15, with no show on April 10.

A post-show talk back session with the cast, director and playwright will take place on April 13. All tickets on April 9 will be two-for-one pricing.

“Mother’s Gift:” will be directed by George Gugleotti and will feature Claire Carroll, Jennifer Cohen and Peter King.

A public reading of King’s play was held at the Waterfront Playhouse in May of 2005, and the response was so overwhelming that “Mother’s Gift” was added to the current season schedule. Since that time, several major theaters in South Florida and elsewhere have expressed interest in this ripped-from-the-headlines play; however, this production will mark the debut of the poignant, funny and shocking play. Supporting local playwrights is a key part of the Players’ mission statement.

“Mother’s Gift” is the story of three raucous siblings who gather in their family home for their mother’s birthday. Over games of Scrabble, they discuss what must be done with their ailing mother. Their heated, often funny debates bring up old resentments and new accusations as the three struggle with what might be the best course of action. They each feel that they have the answer, but as their mother’s situation declines, they are forced to confront assumptions about themselves and their own beliefs. By facing these issues each of them finds new insights into their own lives.

Playwright Monnie King divides her time between Key West, Fort Lauderdale and London. She received her M.A. in Classical Acting from the Central School of Speech and Drama in London.

She garnered high acclaim for her performance in last year’s production of “Equus,” at the Waterfront Playhouse, playing Dora Strang. Other acting credits include “All My Sons,” “Twelfth Night,” “White Devil,” (all in London,) and “Children Of A Lesser God” and Reality TV in Miami.

Director George Gugleotti has been involved with all of the Key West theaters, but has a long history of dedication with the Waterfront Playhouse. He has served as board president and is currently on the executive board of The Key West Players. At the Waterfront, he has directed “A Streetcar Named Desire,” and “A Tuna Christmas,” and as an actor he has recently appeared in The Miser,” and “Dealer’s Choice,” (The Waterfront,) “Molly Sweeney,” (The Barn,) and “Amadeus,” (Founders at Tennessee Williams Theatre.)

Claire Carroll will play the self-assured and caustic Suzanne who aspires to be a writer. Carroll made a splash as Lettice Douffet in the Waterfront’s production of “Lettice and Lovage,” garnering rave reviews. She received a theater degree from Drama Studio London and has acted in TV, film and theater. Credits include Ray Cooney’s “Caught In The Net,” “Alan Ayckbourn’s Confusions,” “Twelfth Night,” the wicked stepmother in “Cinderella,” and many other leading roles.

Jennifer Cohen plays Jenny, the former beauty queen, who clings to her former glory days. Jennifer has appeared in many local productions including last season’s “Pippin” and “Equus.” At the Waterfront, she’s also appeared in “The Maiden’s Prayer,” “Popcorn,” “The Sunshine Boys,” “Stop Kiss,” “Spike Heels,” and “Lemon Cookie.” For the Founders, she’s been seen in “A Funny Thing Happened On The Way To The Forum,” “Amadeus,” and “Don’t Dress For Dinner.” Along with her husband, Larry Cohen, she runs Snuba of Key West and works in local radio and television.

Peter King plays Tom, the eldest child, viewing all events with a sense of responsibility and duty. King was seen in The Waterfront’s production of “Black Comedy,” and last year’s “The Secret Life of Sherlock Holmes,” at The Red Barn. Other credits include Andrew Wyke in “Sleuth,” performed in London and at the Tennessee Williams Theatre in Key West; “On Golden Pond,” “Other People’s Money,” and Reality TV in Miami.

He recently appeared in the smash hit, “Orson’s Shadow,” also in Miami. He is a graduate of The London Academy of Performing Arts.

Opening night tickets cost $35, and include in the post-reception party, catered by Great Events. Tickets for all other performances cost $30. Information on special locals’ prices is available at the box office. 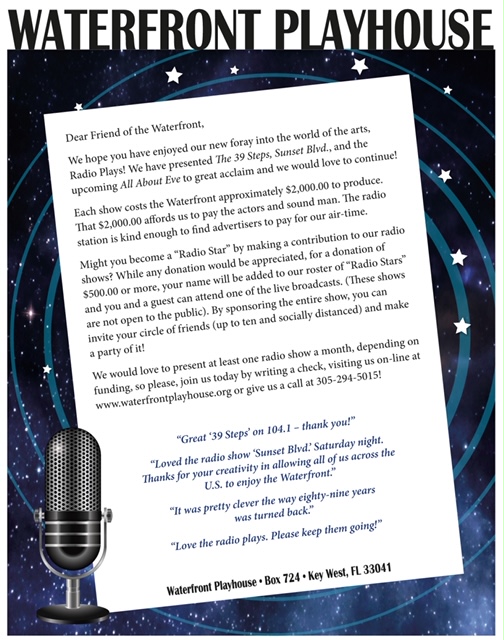 Might You Become A Radio Star? 🎙 A message from the Waterfront Playhouse. Dear friends, let’s keep theater alive in Key West! *CLICK HERE TO DONATE* 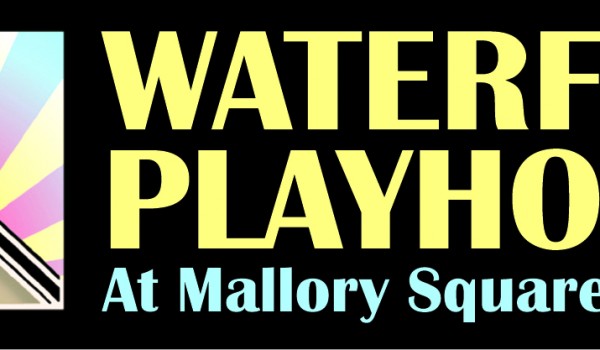 The Waterfront Playhouse season continues……. With a twist! 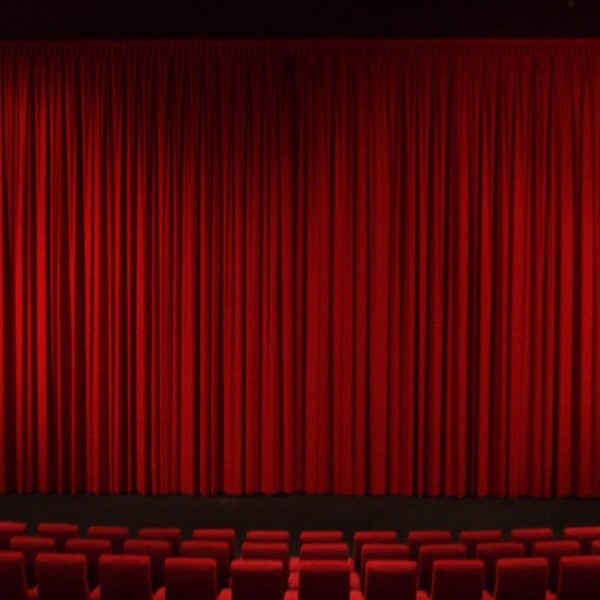 Dear Friends and Patrons, The Waterfront Playhouse has been bringing fantastic stories to life for 80 years, an [...]