You Can Go Home Again: “The Trip to Bountiful” at the Waterfront Playhouse (KonkLife Review)

You Can Go Home Again: “The Trip to Bountiful” at the Waterfront Playhouse (KonkLife Review)

Thomas Wolfe wasn’t necessarily wrong when he wrote the celebrated line that you can’t go home again, but in The Trip to Bountiful, currently on at the Waterfront Playhouse, the talented cast sets out to prove that you can go home, just once. While it may not be on everyone’s bucket list, it’s often a longing that should be satisfied before ‘going gently into the night.’

The plot of this celebrated 1950s play, The Trip to Bountiful, is simple, but because it touches on major universal themes, it’s as relevant today as it was in 1953 when Horton Foote wrote it.

The play involves the elderly Carrie Watts (Joy Hawkins), a deeply religious woman who had to sell the family farm in Bountiful, Texas and move in with her son Ludie (John Reynolds), and his wife Jessie Mae (Caroline Taylor), the daughter-in-law from hell who disrespects and harangues her. Together, the three live in a cramped apartment in Houston, and since the couple have few resources, they rely heavily on Mama’s pension check.

Carrie is woefully unhappy, spending her days cooking, cleaning, and singing hymns. All she really wants is to maintain peace and dignity. In her misery, she dreams of returning to the farm at Bountiful, where she was born and raised her son.

Secreting away her pension check, she plucks up her courage and runs away, hoping to gain independence via a bus trip back to Bountiful. Through the kindness of strangers she does manage to see her old family home one more time, before she goes back to Houston with Ludie and Jessie Mae who have come after her. Of course, the Bountiful she knew no longer exists and the home she loved is derelict. But at least the trip has given her closure and she’s ready to put the past behind her.

Full disclosure, I am a huge fan of Joy Hawkins. I would probably pay to hear her read the phone book, so expectations of her are always high. She doesn’t disappoint in this performance, portraying Carrie with just the right amount of poignancy, dignity, and even humor.

Caroline Taylor, as her antagonistic, shallow daughter-in-law whose behavior borders on elderly abuse, is a major talent in this role, and we love to hate her. John Reynolds is perfect as the hen-pecked husband who loves his mother but has no defenses when it comes to his wife.

At the bus station Carrie befriends Thelma (played charmingly by Jessica Miano Kruel), a sweet young military wife who tries her best to help her. While Carrie’s life is played out and she yearns for home and the past, Thelma’s life has been disrupted by her husband’s deployment, and she doesn’t want to go home again. Carrie craves the past, Thelma wants to reject it.

Of the other minor roles I especially liked M. Donald Bearden as a ticket seller. John Wells performs well as the kindly sheriff who helps Carrie get to Bountiful.

As always, Murphy Davis’s direction is superb. We have seen Murphy Davis cast his magic over several plays in recent years with great results. This one is no exception.

The play was made famous by Lillian Gish’s performance as Carrie on Broadway. For her silver screen performance in that role, Geraldine Page won an Academy Award in 1986 for best actress. The universal problem of aging and aging parents is timeless, and the story is a familiar one today. Two years ago, the play crossed racial lines in a film starring Cicely Tyson, Vanessa Williams and Blair Underwood.

It’s a good play, a classic that still fascinates audiences, even after sixty years. And this production of it is excellent. The Trip to Bountiful runs from Jan. 26 through Feb. 11 at the Waterfront Playhouse in Mallory Square. For more information, go to WaterfrontPlayhouse.org

(Joanna Brady is a Key West writer, author of The Woman at the Light, a historical novel of early Key West, published by St. Martin’s Press.) 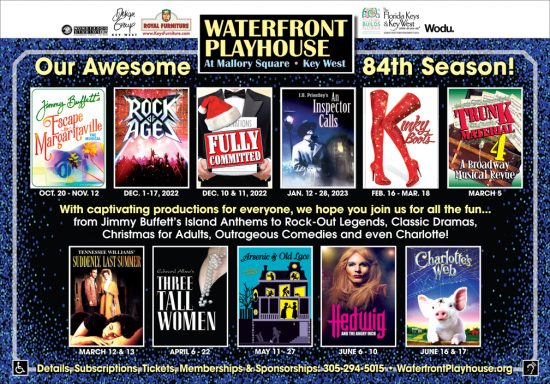 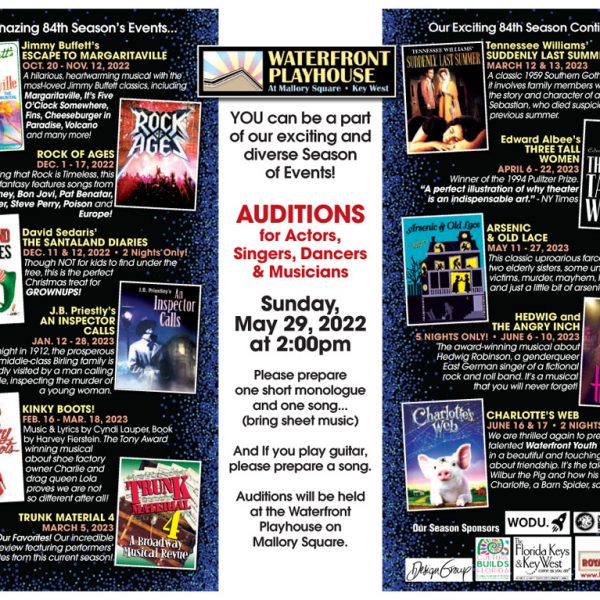 Auditions Set For May 29th 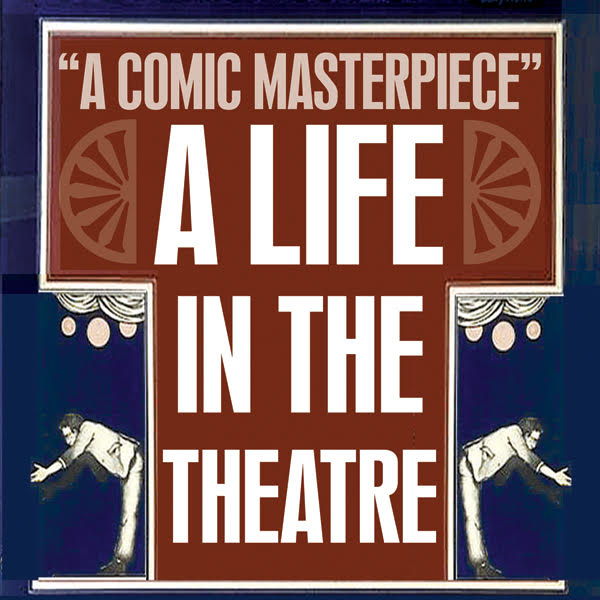 Press Release: A Life In The Theatre

PRESS RELEASE: A LIFE IN THE THEATRE TO OPEN AT WATERFRONT PLAYHOUSE The historic Waterfront Playhouse on Mallo [...]